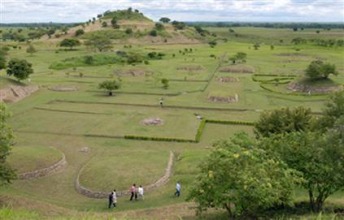 Dominating Central America over a millennium before the Mayans and over two millennium before the Aztecs were present in Central America a people called the Olmecs reigned supreme. Their civilization reigned over Mexico's Yucatan peninsula and their influence extended throughout  Guatemala, Honduras, Belize, Costa Rica, and El Salvador. They had a rich and vibrant culture establishing many of the traditions found in the latter Mayan and Aztec cultures such as ceremonial ball gams and human sacrifice. Their cities were not nearly as large as their latter Mayan and Aztec counterparts though they show clear evidence of planning according to celestial orientations and their society was well stratified with all the hallmarks of a traditional civilization. What is also very interesting about the Olmecs is that they seem to have been well-established tradesmen with a large network of established trade routes. However, around approximately 300 BC their civilization vanished, though Olmec influence as mentioned before can be found in vast amounts among Aztec and Mayan culture. Besides their seemingly mysterious disappearance some of the artifacts that they left behind are also the source of some lingering questions. As a fairly advanced culture they left behind thousands upon thousands of artifacts some of which are displayed below as well as large monuments including entire cities which are still being explored. (The picture above is a one of the ruins of an Olmec city) Sources -1

There has been a great deal of controversy about these heads with many African groups claiming that these heads that show seemingly African features are evidence that there were great civilizations in Africa that were sailing around the world long before the Europeans. However, many established anthropologists think very little of this theory especially as they see very little evidence in support of it. However, given the fact that the Africans would have had a shorter journey across the Atlantic and then up the South American continent than the Europeans it seems very possible that Africans may indeed have made it up to and influenced the Olmecs long before Columbus ever set sail.