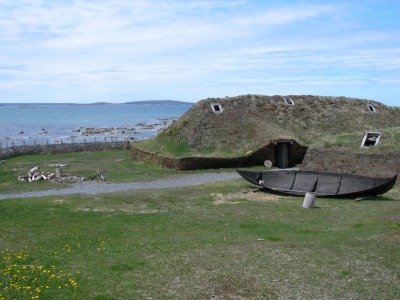 (Photo to the right is one of L'anse aux Meadows a early Norse site that could possible be the site of Leif's settlement in Newfoundland)
The Vikings were some of the greatest seamen that the world has ever seen. There have been legends of the Norse reaching the New World long before Columbus ever set sail for a very long time but now those legends are beginning to become fact as historical data comes to light supporting those legends.
It is now widely accepted that Bjarni Herjolfsson in 986 AD, blown of course by a severe storm on this way from Iceland to Greenland, was probably the first european to ever lay eyes on the North American continent. He likely sailed along Newfoundland island though there are some historians that believe he may have sailed all the way down to Maine. Though Bjarni had no interest in founding colonies in the New World a later Viking know to many did. (1)Years later after learning of the land from Bjarni, Leif Ericson set out for this new land which he called Vinland. Therefore several hundred years before any colonies were founded by the British the Vikings had established themselves upon the New World, however the colony is thought to have been very short lived due in part to its the vast remoteness and the attacks of Native Americans indigenous to the area. The small settlement discovered at L'anse aux Meadows is thought today to the location of the settlement and it is thought that the camp served as a kind-of "base camp" for exploration throughout the area possibly as far south as the St. Lawrence river at the border between the US and Canada. (2)Given the compelling evidence of their discovery, however, many historians refuse to give credit to the Vikings for their discovery because their new knowledge did not go any further than their own families and they never really established themselves in the New World. That honor would go to the Spanish and Portuguese and later to the British. Given what we know about their excursion, however, and how much Columbus actually discovered it seems rather imprudent to give him credit for discovering America when Bjarni Herjolfsson saw the mainland of North America several centuries before Columbus was even born.